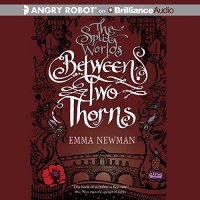 I reread this because I thought a rereading might be good before continuing on with the series since I have a tendency to forget things. Also, I was curious what it would be like to have Emma Newman narrate her own book. Her narration was good but not quite as...enthusiastic? as I was expecting after listening to her podcast, Tea & Jeopardy. I still really enjoyed it though.

You can read my original review here. Basically, fae exist and there's an in-between world called the nether where the people who serve the fae live. These people are definitely stuck in the past, partly because people don't age while they live in the nether, so many of the people of power were actually born hundreds of years ago. Our main character, Cathy, was born into this society but escaped into the real world to try to live a less restricted life. Of course, her past catches up to her, and she's forced back into her family's world, completed with a forced engagement.

There's also these people called arbiters, who are supposed to police magic and the fae-touched people in the real world. They're impervious to magic because they've had their souls dislocated from their bodies and stored in jars. This apparently makes them very ugly and almost completely emotionless and through a series of events, one of them has his soul transferred to a gargoyle, which is just great.

Anyway, I was reading this just for fun, but then I noticed that there was a poppy on the cover so I could count it as the book for Veteran’s Day/Armistice Day "read a book with poppies on the cover". Of course, as it turns out, I'm planning to read a book about WWII after all, but I figure I might as well count this one now and if I finish the other one on time it'll just count as bonus stars.