Between Two Thorns by Emma Newman 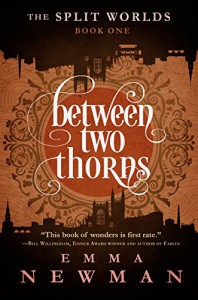 Cathy is from a fae-touched family and she’s run away to live in Mundanus, our world. Her family wants her back, though, so she’s dragged kicking and screaming (more or less) back to their home in the Nether, which is between the normal world and the world of the Fae. Nether (neither here nor there) is more or less stuck in Victorian times both socially and technologically so Cathy basically has no rights there. She just wants to live in Mundanus, go to university, and get to wear jeans and play video games. And she got to, for a little while. She could definitely learn to be a better actor, though. It’s something she should work on. I did get to be a little annoyed at just how terrible of an actor she was. She did have to live there for most of her life, after all.

Meanwhile an important Nether figure has disappeared and someone’s going after the Arbiters who are supposed to police the use of magic in Mundanus. I’m not explaining it very well, but there’s basically our world and a shadow world that’s anchored to ours and that’s where the fae-touched live. The fae-touched have Fae patrons named after flowers, and they’re delightfully off-kilter. One demands a memory as a form of payment. There are sorcerers too, and time doesn’t pass in the Nether world in the same way that it does in the real world. And stuff happens.

After reading Planetfall, I wanted to check out Emma Newman’s other works, and I’m glad to say I’m not disappointed. It’s not perfect but it is fun and I’ll be looking forward to checking out the rest of the series. Axon, the sorcerer’s butler, made me chuckle. I’m pretty sure that Cathy wanted to strangle William at the end, there. I kept wondering if William would end up being an ally for Cathy, but it looks like no, not really. Some of it comes off as a little awkward but I still thought it was fun. There is a lead into the next book but it doesn’t end on a cliffhanger.