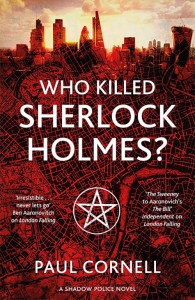 I was a bit annoyed throughout the first part of this book because they kept making references to stuff that happened in previous books without really explaining them, and since I can barely remember the previous book, this was frustrating. And a little repetitive. However, even though the first half of the book was a bit of a slog, the resolution made it worthwhile. These books may be a good candidate for an audio reread at some point.

Technically this series was cut short but I felt that this third book managed to wrap up enough ends that although yes, there would be further things to explore in this world, I’m not frustrated with a lack of answers. The whole thing where they were trying to investigate who killed a fictional character was fun too.