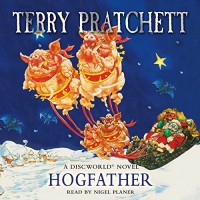 I always have to bring up the stuff to give the troops exchange.

‘Um . . . excuse me, gentlemen,’ said Ponder Stibbons, who had been scribbling thoughtfully at the end of the table. ‘Are we suggesting that things are coming back? Do we think that’s a viable hypothesis?’

The wizards looked at one another around the table.

‘Yes, that’s the stuff to give the troops.’

‘What is? What’s the stuff to give the troops?’

‘What’s that got to do with anything?’

‘Don’t ask me. He was the one who started talking about giving stuff to the troops.’

‘Will you lot shut up? No one’s giving anything to the troops!’

‘Oh, shouldn’t they have something? It’s Hogswatch, after all.’

‘Look, it was just a figure of speech, all right? I just meant I was fully in agreement. It’s just colourful language. Good grief, you surely can’t think I’m actually suggesting giving stuff to the troops, at Hogswatch or any other time!’