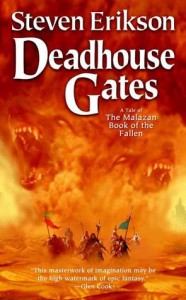 Series: The Malazan Book of the Fallen #2

I'm invoking the "Life is too short and I have too many better books to read" clause.

The same thing happened here. The "clever" banter felt stale and I just didn't find myself interested in any of the characters. I was briefly interested in the apparent storyline to go assassinate the Empress, but honestly the plan felt so convoluted (yes, we want to go to point A but first we have to go to points B and C so that we can get further away to point D so that eventually we can get to point A and have our backup magically parachute in...ok, I admit I was probably half-skimming at that point) that I don't feel there will be enough pay off even there.

Sure, Erikson has invented a complicated fantasy world...but I just don't find it very interesting. This is the tired old fantasy in a new setting, the kind of stuff that made me swear off most fantasy (except for Pratchett) for the better part of a decade growing up.

I'll admit I decided to bail after reading the part about how Felisin is trading sex for favours, not because this is happening in the story, but because of the way it's described. It's a tired old cliché that's so impersonal it's just dull. The funny thing is that Felisin is supposed to be a protagonist and you feel absolutely nothing for her. Anyway, I basically went "Oh, so it's going to be THAT kind of story again...sigh. There are way too many pages left..." And put the book aside.

There are better books out there. Hell, there's better sword & sorcery fantasy out there. And by better I mean not clichéd and can actually hold my interest.