Whose Body? by Dorothy Sayers (audiobook) 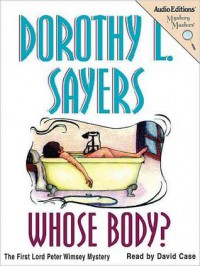 I wasn't planning on rereading this before picking up the second book, Clouds of Witness, but my memory of Peter Wimsey and the plot were a bit foggy and my library had this audio version, so I figured why not?

It's still a fun story, although there are portions of it (in recounting testimony and so on) that come off as very dry in the audio version. It's not really the narrator's fault; it's just not written for audio. There are still some fun exchanges, like this one between Wimsey and Parker:

“Well, it's no good jumping at conclusions."

"Jump? You don't even crawl distantly within sight of a conclusion. I believe if you caught the cat with her head in the cream-jug you'd say it was conceivable that the jug was empty when she got there.”

I think I'll count it for the "Amateur Sleuth" square for the Halloween Bingo. It could also be used for "Murder Most Foul", "Darkest London", and "Terrifying Women". It could almost be considered a locked room mystery, but I'm not sure on that count.