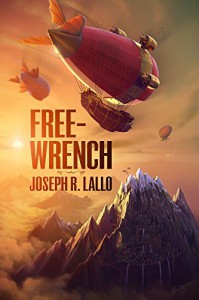 Some cataclysmic event created a toxic gas that covers the globe (but not the oceans?) killing off a bunch of people and driving the survivors to mountain ranges and so on and forcing people to travel by airship between clear areas. Nita Graus is from Caldera, named from the volcanic caldera that somehow protected her people from the toxic fug. The Calderans broke off contact with the rest of the world and so there’s pretty much only blackmarket trade with outsiders. Nita’s mother has a deadly degenerative disease so she’s driven to go off in an airship to try to find a cure or a treatment.

The author admitted in his author’s note that this novella only took about 3 months to write and publish and I’d say it shows. Some of the ideas could have been neat but a lot of them didn’t seem all that well thought through. Enemy airships immediately succumb to the same type of projectiles that barely scratched their own airship (there was some handwaving about strengthening the shell, I think, but it was pretty patchy to begin with) and a lot of the fight sequences were hard to visualize. I called the big “twist” almost immediately and found it to be extremely telegraphed. And it was weird and abrupt to see the captain go from “no, we cannot possibly jeopardize our trading position” to “yes, let’s attempt a heist”.

It was pretty well wrapped up so I’m not sure whether I’ll read the next one. I picked them both up in a bundle at some point, so I’m glad I finally got around to reading this one. It wasn’t terrible, but due to the issues mentioned above, I didn’t feel like I could rate it more than “okay” or two stars. Oh, I forgot to mention that a lot of the viewpoints or philosophies felt kind of preachy which bugged me even though I didn’t necessarily disagree with them. They just felt over the top, I guess, and Nita’s “I know better” attitude was grating.

I read this for booklikes-opoly square #29 The Monorail “Read a book that involves travel by air, has an airplane on the cover or is set in a city with a subway”. Nita joins the crew of an airship which travels around, so I think that covers the “travel by air” part, and there’s also an image of the airship (dirigible) on the cover (not an airplane, but close enough it probably counts). I’ve seen page counts of 152 (paperback) and 178 (Kindle) but either one adds another $4 to my bank, bringing my total to $160.