Sorcerer of the Wildeeps by Kai Ashante Wilson 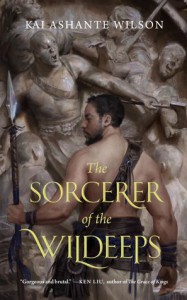 Series: Sorcerer of the Wildeeps #1

Sorcerer of the Wildeeps follows Demane, a human with godly blood who is a guard for a caravan. A friend of mine really liked it so I came in with fairly high expectations. There’s a gay romance angle that’s kind of sweet, but largely I just couldn’t get into the book. I think I agree with others who complained that the sequences with the guards in the caravan before they got to the Road through the Wildeeps went on too long. There were also some weird tense shifts that contributed to the lack of cohesion of the novella. It was more fun once they actually got to the Wildeeps but it was a case of too little too late, and I found the twist near the end too well telegraphed. I don’t think I’ll be reading the second one.

Overall it’s an interesting world but I wasn’t drawn into the story. I also wasn’t drawn in by the language; I don’t see why others found it so appealing.