After Atlas by Emma Newman 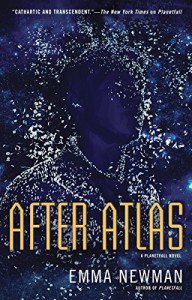 This was a satisfying read (I’m actually still reeling from the ending, but I thought I should get some thoughts down before they slip away). I’d been looking forward to the book’s release for a few months now and trying not to raise my expectations too high. I really enjoyed Planetfall and rated it highly because despite a few problems that I could nitpick about, I blazed through it. So I was a little afraid I’d focus more on the problems than the enjoyment this time around, but I don’t regret my decision to buy it and start reading it the day it was released. In fact, it was a welcome distraction from all of the election brouhaha. [Aside: It made for some interesting associations anyway.] In fact, I think After Atlas had fewer “problems” than Planetfall.

After Atlas covers events back on Earth after Atlas (the colonists’ ship) from Planetfall left. So it takes place in the same universe as the first book, but it’s not a sequel and can be read without the first. In fact, my memory on some of the details of Planetfall is a little hazy, so I may want to reread them both closer together at some point to experience some of the ironies I may have missed.

Earth has progressed along its dystopian path since Atlas’s departure, and we’re given a good introduction to the workings of the world by the MC, Carlos Moreno, a detective for the Ministry of Justice (MoJ) [I forget his exact title, but it doesn’t really matter because he’s owned by the MoJ]. Carl gets called in to investigate a suspicious death at an elite country hotel (it’s not really a resort and it’s bigger than an inn). The story mainly centres on this murder investigation and there’s a bit of a cyberpunk element to the world since most people have implanted chips that allow them to process information virtually and always be connected.

Although I found the world interesting, I did find the investigation itself to be a bit disorganized since Carl kept not pursuing leads as quickly as I wanted him to. It seemed a bit slow but that may partly be because I was reading that part of the book in short chunks and so things may have appeared to take longer than they actually did. At one point I really wanted to bang on his window and shout “Check the gingerbread!” And so on. A few things seemed delayed for convenience, but it mostly worked.

The book does incorporate two things that I normally complain about: it is written in the first person present tense. I’m not complaining about it here because it took me about fifty pages to notice, so I’m counting it as an instance where it was well done. It didn’t bother me here, but I can’t say for sure that it wouldn’t bother someone else. I liked the ending too, although again, everyone may not agree with me. It was starting to seem like too pat of a wrap-up, and then the ending happened.

If you liked After Atlas and are feeling a little traumatized, you may want to try Children of Time by Adrian Tchaikovsky; it’s a little more upbeat. If you’ve read both, there is an association there (even though they sound completely different).

Sorry for the disorganized thoughts. But I'd rather get them out now, even if I'm being somewhat arbitrary with my rating, than wait and not get around to it.