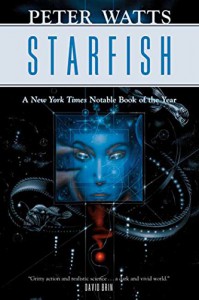 Starfish is an uncomfortable book. I feel I should issue a warning that several of the characters have been abused or were abusers. That said, it’s also a good book. There is a dismal atmosphere that is both oppressive and claustrophobic, and a large part of it takes place in the depths of a black ocean. These people are tasked with the care of a geothermal generator station on the ocean floor. The combination of their initial personalities and the behaviours they develop in this isolated alien place is really creepy.

I might have rated it higher if I hadn’t spent most of the book wondering where it was going. I did enjoy the journey but there was a vague uncertainty throughout a significant chunk of it. As it turns out, the book is headed somewhere; it’s just not apparent from earlier on. So I might increase my rating on a reread although I need to finish the series before even considering one.

Simple or complex. File or Infection. Checkers or Chess. βehemoth or biosphere. It was all the same problem, really. 1211 knew exactly which side it was on.

The thought that everything comes down to checkers or chess amuses me. The quote won’t make sense if you haven’t read the book (hence the spoiler tag).

I’m counting this one for the “Read by candlelight or flashlight” square for the Halloween Bingo since I read it at night on my ereader (or at least I did until I got near the end). This really isn’t the best book to read before bed though.