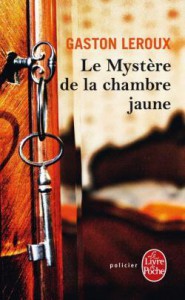 Mlle Mathilde Stangerson is attacked at night in her yellow bedroom and the perpetrator magically escapes without anyone seeing him. Her room is literally locked and there is no other means of access. Enter Joseph Rouletabille, the 18-year-old reporter who aims to beat the police at their own game and unravel the mystery. And for such a set-up, the mystery turned out to be surprisingly weak.

I think this book would have been more interesting if there hadn’t been the layering of multiple written accounts. It did serve to set us back in time, yes, but it also served to delay the unfolding of the narrative because there were multiple explanations and asides where new documents were used. Furthermore, there were several artificial delays where the narrative interrupted itself to postpone revelations in what I can only describe as a gauche manner. By the time we were allowed to unravel the mystery, it was a bit of a let-down. There was so much re-hashing that it felt far too drawn out.

I’m calling the mystery weak partially because of the way it hinged on disguises. The whole melodramatic way that things were revealed at trial was ridiculous, and any mystery novel that has to rely on an international criminal to pull off its solution is a weak one, in my opinion. I had guessed that a secret marriage may have been the reason for the daughter’s reticence, although it was just a guess. Having the criminal have her as a love interest made me think of Jack Glass by Adam Roberts (which I found disappointing too but in a different way), which then in turn made my think of Arsène Lupin since the character of Jack Glass was apparently based on him.

I also found the arranging of people just-so in the middle of the night in order to catch the intruder to be ridiculous.

As it turns out, it was too much to hope that the intruder’s task was unfinished by the time it took Rouletabille to run around for ten minutes. He actually had the time to leave and come back.

So if you’re looking for a better French mystery novel that was published in the same year, go read Arsène Lupin, gentleman-cambrioleur by Maurice Leblanc instead. It’s a lot more fun. It’s also available on Gutenberg in English and French for free.