House of Suns by Alastair Reynolds 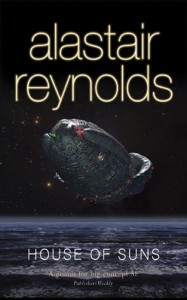 This book held a lot of promise but I feel that ultimately it didn't really deliver.

This is a far future hard science fiction novel where a young woman called Abigail Gentian who lived a good thousand years in our future cloned herself a thousand times (and varied her traits or at least the different phenotypes sufficiently to produce visibly different people so it's not exactly cloning, especially since half the clones were male) and sent her "clones" out to explore the galaxy. The clones are called shatterlings because the original was "shattered" into a thousand pieces of herself. Other people from her era did this too and so there are multiple "Lines" roaming the galaxy, trading knowledge. So far, so good, mostly. There are also more normal humans that spread out and adapted themselves to the new planetary environments that they encountered.

The story trades POVs between two shatterlings, Purslane and Campion. Campion is a kind of ne'er do well and his antics make them both late for the planned reunion. Purslane puts up with him. Since this is a reunion after each Gentian shatterling finishes his or her circuit of the galaxy, being a few years late isn't normally a big deal, but they manage to be more than a few years late and arrive to find that the reunion has been attacked, devastating the Gentians. Cue space battles and a search to figure out who was responsible for the attack, who may have betrayed them, and why.

There were some very interesting facets to the book but I also experienced periods of boredom where I felt things weren't going anywhere. There were also long pauses for entering stasis because sixty-two thousand light year space chases. I'd say that overall I was entertained but not engrossed. YMMV.

Death of first Kobo Aura One