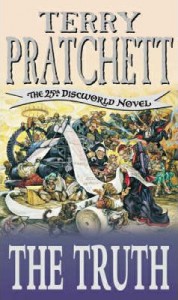 'A dwarf needs gold to get married.’

‘What … like a dowry? But I thought dwarfs didn’t differentiate between—’

‘No, no, the two dwarfs getting married each buy the other dwarf off their parents.’

‘See? Cultural misunderstanding once again, lad. It costs a lot of money to raise a young dwarf to marriageable age. Food, clothes, chain mail … it all adds up over the years. It needs repaying. After all, the other dwarf is getting a valuable commodity. And it has to be paid for in gold. That’s traditional. Or gems. They’re fine, too. You must’ve heard our saying “worth his weight in gold”? Of course, if a dwarf’s been working for his parents that gets taken into account on the other side of the ledger. Why, a dwarf who’s left off marrying till late in life is probably owed quite a tidy sum in wages – you’re still looking at me in that funny way …’

‘It’s just that we don’t do it like that …’ mumbled William.

Goodmountain gave him a sharp look. ‘Don’t you, now?’ he said. ‘Really? What do you use instead, then?’

‘Er … gratitude, I suppose,’ said William. He wanted this conversation to stop, right now. It was heading out over thin ice.

‘And how’s that calculated?’

‘Doesn’t that cause problems?’

‘Ah. Well, we know about gratitude, too. But our way means the couple start their new lives in a state of … g’daraka … er, free, unencumbered, new dwarfs. Then their parents might well give them a huge wedding present, much bigger than the dowry. But it is between dwarf and dwarf, out of love and respect, not between debtor and creditor … though I have to say these human words are not really the best way of describing it. It works for us. It’s worked for a thousand years.’