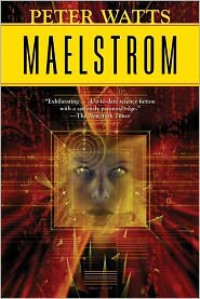 Maelstrom picks up where Starfish left off, but I'm not really sure how to explain the book. It's good, but there's an underlying theme of abuse that could turn people off. For most of the book, we follow Lenie Clarke as she keeps slipping through the clutches of those who are after her because she is a carrier of βehemoth. Achilles Desjardins is one of specialists assigned to help track down βehemoth and consequently Lenie, but he keeps getting thwarted by a kind of computer virus for lack of a better term that gets called Anemone. There's a lot about free-will and it's all complicated so that it probably just sounds weird.

I was conflicted about the characters of Lenie and Desjardins and even Ken Lubin throughout and I relished this complexity despite the parts that made me feel uncomfortable.

It was really good, but I'm going to need a lighter read for my next book.