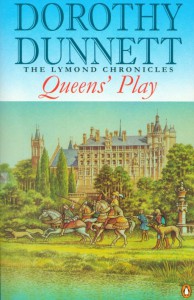 So far this book doesn't seem quite as engaging as the first one, although it is an easier read.  Less poetry but also fewer moments of awesome. I will admit that I was taken in by Lymond's disguise, however. Lymond has gone disguised to the French court to help protect the young Queen Mary who has been having "accidents".

I am just barely halfway through, so it's fairly safe to say that the shit has yet to hit the fan, and there may be plenty of awesomeness ahead.

ETA (from a few pages later): Ok, I wasn't expecting THAT.

Btw, how does one pronounce the Irish name Oonagh?

Another edit: Apparently it's oo-nah, so it's just like Una, really. I'm assuming that's a name. It sounds like a name.