The Sorrows of Young Werther by Johann Wolfgang von Goethe 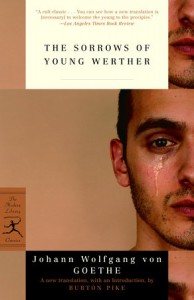 I wanted to read this 18th century publishing phenomenon because of History Bites, a slightly crazy show that liked to imagine what history would have been like if television had been around. It did an episode on Goethe where a bunch of impressionable youths were dressing up in Werther’s blue coat and yellow vest like kids today might dress up like Harry Potter (it aired back when Harry Potter was still relatively new and really popular). There was probably some other stuff in that episode but I don’t really remember it.

So I was curious, but as usual I didn’t get around to it for a while. And then because of the subject matter, I set it aside because I really didn’t need a depressing read at the time. It wasn’t quite as bad as I feared in that department, but I also didn’t have much sympathy for Werther beyond recognizing that he was really depressed and needed a lot more help than he got. I felt bad for him but I also didn’t really enjoy reading his letters. I probably would have had more sympathy if he hadn’t subscribed so strongly to the Romantic movement or what would develop into the Romantic movement.

I’m labelling it “A hard book” for the summer book bingo, partly due to the subject matter and partly because I found my mind wandering during several of Werther’s romantic effusions (in the sense of the romanticism of nature etc and not necessarily about Charlotte).

The human race is a monotonous thing. Most people work most of the time in order to live, and the little freedom they have left over frightens them so, that they will do anything to get rid of it. Oh, the regimentation of mankind! (p12)

I still can't quite believe that Werther actually borrowed the pistol he shot himself with.